The virtue of airbags

So, I’m driving home in-between shifts today and I’m stopped at a light. There’s a forest green Silverado with a camper top on the back in front of me. The light turns green. The Silverado pulls out, gaining speed (our lane is a little recessed from the intersection). Suddenly, I see a puke green Honda Element flying through the intersection. I literally had enough time to process the thought “There’s going to be a crash” when I saw the Silverado hit its brakes and try to swerve. I hit my brakes about the same time because I realized that there was going to be about three and half tons of metal blocking my way in a split second.

The Silverado plowed into the passenger’s side of the Honda, just like you’d see in the movies. The Honda was almost knocked over; that’s how hard the collision was. I pulled around the side and parked my car, my stomach getting a little queasy because I was going to be the first on the scene and, frankly, I wasn’t sure what I was going to see (the Honda was going close to 40 as it came through the light). I was prepared for some blood and guts. I first started up to the Honda and the guy looked up. “Good…he’s not decapitated”. I thought. I kind of gave him a questioning shrug and mouthed “Are you OK” and he gave me a thumbs-up. Cool, because I thought that he would have been fucked up beyond belief.

I then went around to the Silverado and asked the guy through the open window if he was OK. He said he was and I opened the door for him. He had a stinger because he was shaking his arm a little bit. The only thing that the Honda driver had was a skinned-up shin.

The drivers were the exact stereotypes of what you would expect to be driving the vehicles. The Honda driver was a skinny emo-alternative-popper type with wirerims and some cool tennies (was he the lead singer of Weezer?  I don’t think so, but he could have been him when he was 20 years old). The truck driver was a really big trucker-type dude with a walrus moustasche(he probably weighted close to 300 lb). Both were right out of central casting. They hit so hard that four very heavy ammo cases filled with tools and nuts and bolts were left on the street after crashing through the tailgate of the Silverado.

In any case, I lost about 15 minutes of my break, but I stuck around to give a statement. And to also wonder at the amazing ability of air bags to prevent serious injury.

And, after I buckled my seat belt and drove home, you’d better bet I was looking both ways at the stop lights. Even more than I usually do. You see, I drive a Miata.

In the past day or two, someone found my site by searching for “how to be a waiter – carry three plates”. So, I thought I’d tell you how to carry four plates.

In your primary hand (if you’re a lefty, you probably use your right hand because you use your left to serve), take a plate between your thumb and index finger on the inside edge after taking a serving napkin in your hand and draping it over both your hand and your forearm. Spread your fingers slightly and slide a second plate between your index finger and your middle finger on the outside edge and squeeze down. You’ll support this plate with the last two fingers. This is called “butterflying” the dishes (if you looked from the top, it would resemble the wings of a butterfly). Slide your third plate on your forearm under the two plates and hold it by cocking your arm so that the edge closest to you is held by the inside of your elbow. Make sure that it’s held tightly and as level as you can. Also, make sure that the edge on the first plate in your hand doesn’t touch any food on the second or third plates. Take the fourth plate in your free hand. This is the plate that you’ll set first.

About this forward/backwards thing – first, I should define for any novices what the pivot point system is.

The pivot point system is a system for numbering the guests at a table so that you always serve the proper person the proper food, even if you aren’t waiting on the table. It’s a system designed to be consistent throughout the restaurant and known by everyone who has to run food.

In classical service, pivot points were done counter-clockwise from a given point. Usually, the point designated as number one was the point to the right where you normally  approached the table. Or alternately, it was point closest to a given point in the restaurant no matter how the table was situated in the restaurant (the entrance or the kitchen usually).  You would start at that position and number counter-clockwise. You went counter-clockwise because you always served from the left and removed from the right. If you think about it, doing it counter-clockwise allows you to avoid having to go around someone’s back to place a plate. You’re always in position to place a plate first and then go around the person’s back to approach the next person. It’s the most natural way to do it.

…I have never worked in a restaurant that goes counter-clockwise. Most modern restaurants go clockwise. I’m not sure why this is, except to say that that perhaps clockwise is easier to remember and feels more “natural” to modern folks. In this system, you start with the person to your left as you approach the table. Obviously, you’ll be trained in the system that your restaurant uses, as well as the method to determine the first pivot point.

If the guest is seated at a banquette, you start with the first person on the bench and go around in a clockwise fashion ending up with the person sitting to your right on the outside side of the table (they’ll be the closest to you).

You should always try to serve the women and children first. However, this isn’t always practical if someone is helping you run food or it’s insanely busy or you have a really large table. If you have a four-top or smaller, this requires you to know which positions the ladies are sitting at so that you can rearrange the order in which you pick up the plates. I’ll admit that I don’t always do this either, but if you start early in your career, you might get to make it an engrained habit.

A couple of things – there are waiters who can carry more. Don’t try to carry too much too soon. Practice, practice, practice! Also, be very careful about carrying smaller plates like side plates on your forearm. You have to have great balance to be able to put one on your forearm because you can’t lock it between the plates in your hand and your forearm. If you don’t have perfect balance, don’t do it. Also, some napkins are slicker than others. Those napkins with a high cotton content have a better grip, while those “for show” mostly polyester ones are quite slippery. If the napkin feels slippery, try another. You need a napkin with good grip on it. That’s why many servers carry their own, although health departments are starting to frown on the old practice of hanging a towel or napkin from your pocket. Also, make sure that the plates have been cleaned of any spatters on the edge before you go. That’s normally an expo or chef’s job, but you are the final quality control person. Carry the plates as level as you can to avoid disturbing the plate presentation and, as I said before, don’t let another plate touch any food. If you can’t avoid to do to the way the plate was plated (it might have food placed too high), then carry fewer plates.

Here’s a pictorial from venerable server Helmut Schonwalder at The Waiter’s Digest (link posted in the Waiter’s Stuff blogroll). You have to click on the pictures to see the entire set. 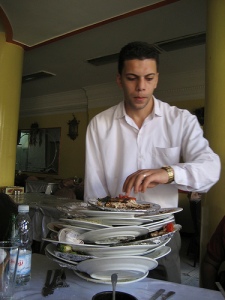