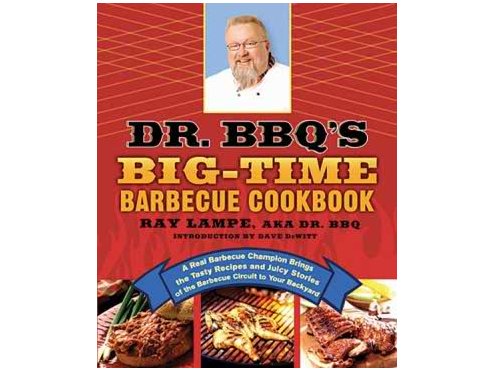 Dr. BBQ’sBig-Time Barbecue Cookbook: A Real Barbecue ChamQpion Brings the Tasty Recipes and Juicy Stories of the Barbecue Circuit to Your Backyard

If the hyperbole and chest thumping of Paul Kirk (The Baron of BBQ) turns you off, but you’d still like some “inside information” about barbecue competitions, as well as some great rubs, marinades and smoking procedures, this is the book for you.

Modestly priced, this book offers a lot of practical advice and information about the different regional and local varieties. there are name checks on famous BBQ “joints” and plenty of pics of barbecue culture that inform the novice.

I do disagree with him about cooking pork butts and shoulders though. Now, keep in mind that I don’t cook for competition but for flavor and goodness. First of all, I have found that there’s little difference between cooking a big shoulder or butt at 350° for the first 4 hours and keeping the temperature at the BBQ approved 225º – 250º. You see, it’s still going to take at least 1 1/2 – 2 hours per pound for most butts and, because I use a rub with a lot of sugar content, my bark (the crunchy outside “skin”) is going to be black, whether I cook it totally “low and slow” or if I let the temperature go higher for the first part. This is due to the extreme muscle mass of the cut. This mass keeps you from “overcooking” it and making it tough. Keep in mind that it’s going to take you 8 – 14 hours to cook it. As long as you limit the really high temps to the first 4 hours or so, you’ll be fine, as long as you don’t mind a black bark. To me, the black bark adds to the flavor. Also, Lampe removes the fat cap before “pulling” the pork (pulling by shredding it, not pulling it from the smoker). To me, incorporating the fat cap into the pulled pork only adds to the flavor. If you’ve cooked it to 195° or higher, the fat cap will become gelatinous and will actually “melt” into the final product. It keeps it very moist and tasty.

If cooking it at an initial higher temperature doesn’t speed up the process all that much, why do it? Well, I do my smoking in a 22″ Weber kettle. It takes a lot of fiddling to get the temp down to 225°, and you waste a lot of fuel. What I do is get a good honkin’ fire going and put the rubbed butt or shoulder on directly out of the fridge. I can then ignore it for at least 3 hours, because the temperature will stay at at 350° for an hour and a half and will start to drop to about 200° for the next hour and a half. At that point, I’ll get the fire blazing again and start all over again. By the four and a half hour mark, the temp will have dropped again down to about 250°. At this point, I’ll let it go to 225° and keep it pretty close to that. for those who have bigger rigs or smokers with sideboxes where you can add wood without opening the cover, it’s easier for them to maintain a constant temperature. But with a kettle, you have to remove the lid, which makes the temperature instantly drop. Having done some “scientific” experiments taking temperatures of both the air and the meat, charting the results, I’ve come to the conclusion that the higher temps don’t hurt the pork one bit as long as you take the pork directly from the fridge and you limit the higher temps to the first 4 or 5 hours.. My pork is every bit as savory as pork cooked at a constant 225° – 250°.

Other than those quibbles (and admittedly they might not apply if you’re trying to win a BBQ competition), I highly recommend this book.

Here are a few photos of my own “Memphis-style” pulled pork: 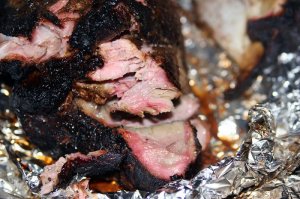 And the fat cap in all of its mostly rendered glory: 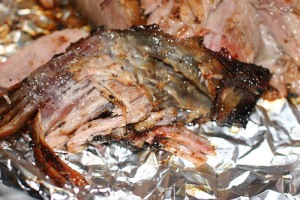 In part one, we tried to paint sidework with some broad brushes.

I’m not going to list all possible tasks that you might have to do on a typical shift. Every restaurant has its own unique needs and it would be impossible to list them all. Besides, you’ll find out soon enough what they are. So, why is sidework important? Because it’s so often thought of as an afterthought; it’s thought of as drudgery. Waiters whine about it. Waiters blow it off. Waiters do part of it but don’t finish it. Waiters do a poor job of it. Don’t be one of those waiters. While you can certainly whine about it, do your sidework. Why, you might ask? Why should I do it when I see others getting away with sliding on theirs? After all, you’ll soon identify certain slackers who can’t be relied upon to do their work and they seem to get away with it. Well, all I can say is, don’t be that guy (or gal for that matter).

It’s extremely important that sidework gets done because nothing will put you in the weeds faster than having to break your routine during the rush to go back to the walk-in to grab the half and half that someone else hasn’t bothered to restock as part of their sidework. This is especially grating when you make it easy for them by assuring that they can put their hands on what they need because you did your sidework while you hunt through the restaurant for a single clean glass because they didn’t do theirs.

Hold your fellow servers accountable for their sidework.

And remember, someday, you will be a closing waiter and you will rely on others to do their work. You already have enough to do without having to do someone else’s job too.

The main thing is for each waiter to pull their weight so that if the waiter gets in the weeds, it’s not because his or her fellow waiter let them down.

It’s hard to do sidework when the rush is on. However, it’s even harder to have to do someone else’s sidework on top of  that. Or suffer the consequences of not being able to put your hands on what you need when you need it.

Sidework is important. Curse it, fear it, hate it, but respect it. Because to respect it is to respect your fellow co-workers.