The vast majority of waiters will never work with a “classic kitchen brigade”. But it’s useful to know what it is and how it has affected commercial kitchens.

This was an invention of Georges Auguste Escoffier, the famous French culinary giant of the late 1900s and early 2oth Century. Before Escoffier, most “commercial kitchens” were the kitchens of the aristocratic class. Restaurants for the public were almost unheard of. These “palace kitchens” were full of redundancy. It was almost the case of “too many chefs spoil the broth”, although the broth was rarely “spoiled”, it just had multiple chefs working on it, or individual chefs being responsible for producing a single dish from start to finish. This obviously wasn’t much of an issue to the wealthy, who were used to paying for extra household staff.

However, in order to produce food in a public restaurant (the grand hôtel of the 19th Century being the primary setting for such public dining facilities), something had to give. Escoffier was basically the Henry Ford of the dining world, producing an “assembly line” approach, with people specializing in narrow facets of food production. In fact, we still use the terms “hot line” and “cold line” to this day.

His was simultaneously a simple and a complex system. Simple in that the various tasks and responsibilities required to produce a menu item were given to individual cooks – for instance, sauces were the provenance of the saucier, baked items the patissier. Complex in that there were many specialists that had to be coordinated and basic ingredients such as sauces and stocks had to find their way to the various stations where they would be used to assemble the dishes.

No longer were there multiple “chefs”, but a chef and his immediate assistants managing a ‘brigade” of various cooks. The chef was the commander of the kitchen brigade and he had a “headquarters” section consisting of his sous-chefs, and soldiers who did the “fighting”. The chef was responsible for the tactics (the recipes and the implementation of those recipes) and was the figurehead upon which the success of the brigade was dependent.  The sous-chefs were his (chefs in those days being all male) “company commanders” or headquarters people; the soldiers who kept the paperwork flowing and the staffing requirements met and to act in the chef’s stead when the chef was off;  the people who implemented the strategies set forth by the commander.

Without such specialization and a militaryesque chain-of-command, it would be very difficult for a restaurant to do the sort of volume that it has to do in these modern times, when so many people are dining out as much, if not more, than they dine at home.

Obviously, in our modern kitchens, we don’t have the need for such extreme specialization, and many positions have either been combined or eliminated entirely. We’ll discuss this later.

In part 2, we’ll run down the traditional Escoffier-created positions, giving you the original French name and the English version of the job title. 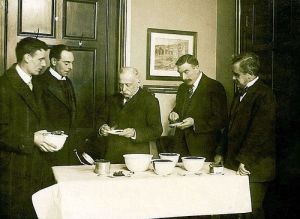 Escoffier is the gent with the big white Imperial moustasche.

One response to “The classic kitchen brigade – pt. 1”