Brandy is to Cognac as:

A. The Ku Klux Klan is to Barack Obama

B. Barack Obama is to Glenn Beck

C. The Republican Party is to Tea Baggers

The answer is: (a qualified) C.

I qualify it because I’m sure you could find a tea bagger that isn’t a Republican (I’m talking to you Mr. Independent). You might even find a Democrat or two that is a tea bagger (in a political sense, of course).

But, sweeping politics aside, basically, all Cognacs are brandies, while only a subset of brandy is Cognac. Armagnac is also a brandy, but it is produced in the Armagnac region instead of the Cognac region (it lies just south of Cognac).

So…what is a brandy?

The word comes to us from the Dutch word for “burned wine” – Brandewijn. The Dutch discovered that if they distilled wine, they reduced the volume so they didn’t have to pay as much tax when they shipped it from place to place.

Societies had been distilling wine since pre-Christ times, but the Dutch perfected the process to save some tariffs. They intended to turn it back somewhat into wine by adding water (and volume) at the final destination, but discovered that the product was good on its own (it developed character from the wooden barrels that it was transported in, much as a great Bourbon or Scotch gets its character from barrel aging).

“Burned” came from the distillation process.

Brandy is called Brandwein in Germany (“burned wine) and eau de vie in France. Kir is cherry brandy (not to be confused with Kir, the cocktail). Slivovitch comes from the Slavs and Metaxas comes from Greece (it’s a brandy hybrid, if you want to be precise). Some people even call Calvados ‘brandy” even though it’s an apple-based distilled spirit, instead of grape spirits. In fact, many brandies are adulterated after the fact by the maceration of various fruits, although Calvados replaces grapes with apples, while other brandies take the maceration route.

Basically, you can consider brandy a distilled grape product. This means that grappa is technically a brandy as well.

Think of Cognac and Armangac as brandies with pedigrees. Armangac is usually more “rustic” and rough-hewn than Cognac. This is due to a slightly different process and a different geographic influence.

This is only an overview. later, we’ll get into such things as XO, VSOP, etc. In the meantime, Google is your friend… 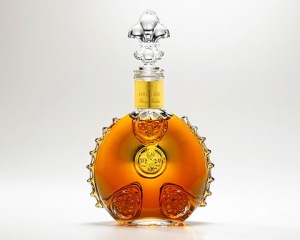 The famous Louis XIII from Rémy Martin. Nicknamed “Louis Trey”, it’s a blend of 1200 different Cognacs, aged from 40 to 100 years and offered up in a Baccarat crystal bottle worth $100. It’s traditional in restaurants that serve this precious liquid that the person who orders the last glass from the bottle gets the bottle as a gift. A single serving of this usually runs around $150, and the smart restaurant performs a bit of ceremony when they serve it.

2 responses to “Brandy vs. Cognac”