Cookbook of the day – The Harry’s Bar Cookbook 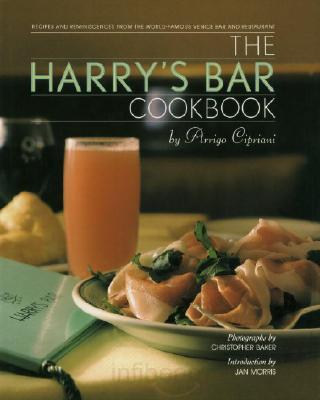 There aren’t many dishes where you can point to an inventor. Most dishes are either old classics with creators long-forgotten or they just have sprung up without attribution. Probably the most famous dish attributed to a single person is the Caesar salad, a salad invented by Caesar Cardini in Tijuana Mexico in the 20s and there’s even a little dispute about that.

What’s beyond dispute is the fact that carpaccio, the famous thinly sliced beef (or other meats for that matter), was invented in 1950 by the owner of Harry’s Bar in Venice, Giuseppe Cipriani. The Contessa Amalia Nani Mocenigo had been forbidden to eat cooked meat by her doctor and, voila! the carpaccio was born. Cipriani named it after one of his favorite painters, Vittore Carpaccio, the Venetian Renaissance painter who used bright reds and whites in his paintings.

This is the actual Harry’s Bar carpaccio, courtesy of famed food writer John Mariano at www.johnmariano.com :

Notice that it’s not all gussied up with superfluous greens, scattered with capers or any such excess. That’s the original.

And you can read all about it in this wonderful cookbook,  The Harry’s Bar Cookbook, written by the son of Giuseppe, Arrigo Cipriani (Arrigo is Italian for Harry).  The history of the restaurant is lovingly told by Arrigo, who relates the story of how Harry’s Bar came to be. It was named for an American, Harry Pickering, who was the beneficiary of kindness from Giuseppe, who at the time was a barman at the Hotel Europa in Venice. I won’t spoil the story, except to say that it’s a tale worthy of F. Scott Fitzgerald. You’ll have to pick up the book to read about it.

Harry’s Bar has always been a hangout for the wealthy and famous of the world, from Ernest Hemingway to the Onassises, globe trotters and royalty, decadent expatriots and famous movie stars like Richard Burton have found their way to the modest bar for the glories of great Italian ingredients simply and freshly prepared, and they are prepared to pay a premium price for it. The place oozes history, and you’re along for the ride with this cookbook.

Winner of the Julia child 1st Cookbook Award and The James Beard Award, you’ll find this book a treasure of family pride and tales of the upper crust. And let’s not forget that it’s Harry’s Bar, not Harry’s Restaurant, a point that Cipriani makes as he tells you how to make the perfect Bellini, the peach cocktail that he claims his father invented in the 30s. So Giuseppe is responsible to not one but two well-known culinary items. Amazing.

Anyway, you’ll find all of the recipes to make you feel like you’re overlooking the canals of Venice and you’ll get the famous carpaccio sauce recipe as well.

Posting from as far south as you can get in the United States (and formerly from the very cool state of Colorado), this Key West bartender has some great stories and trenchant insights on the behavior of Homo Barstoolis, that species of Homo Sapiens known for a dominant lizard brain,over-sized ego and poorly developed and alcohol-impared ability to summon common sense and decency. The part of the brain that controls social functions is also rather fractured in this showy member of the human genus and thus, it’s an infinitely fascinating species to watch in the wild, especially during its mating rituals.

Let’s all welcome R.G. to the fold with a hardyZum Wohl! Click the link under Waiter Stuff. Now.