Sometimes I do a post that I have every intention of following up on. But then, it falls through the cracks. Here is that very post:

Last year, I wrote about brandy and cognac. I mentioned that I’d be getting a little deeper into the cognac thing, so, half a year later, here we are!

As I mentioned in that post, cognac is a subset of brandy. It’s named for a small mercantile town just north of the Bordeaux region of France. Cognac sits on the Charente River, which empties into the Bay of Biscayne at Rochefort , just north of the Gironde estuary, the site of the most fabled (if not the most “grand”) Chateaux in the world such as Margaux, Latour and Lafitte.

In the middle of the last millennium, the Charente was a somewhat significant river for shipping, sending barges laden with casks of brandy to the world and receiving spices and other exotica from around the globe. Cognac was a natural river port, but actually, the town further upstream, Jarmac, current home of Courvoisier, was on track to be the “home of cognac” that Cognac itself eventually became. According to Nicholas Faith’s great book on cognac, which, sadly, I can’t put my hands on at the moment, Jarmac was a more significant port, but a nobleman who had influence (perhaps it was Louis XIV) decided to show favor to Cognac over Jarmac (I’m going by memory here). Hence, most of the “houses”  ended up in Cognac proper, formerly a large salt distribution center. It’s quite possible that without noble intervention, we could all be drinking jarmac today.

Most people aren’t aware that cognac is like blended scotch in that most of the cognac that we consume is blended from many different barrels. Each “house” has its own flavor profile that it keeps standard through the use of the cellar master (Le Maitre de Chai – yes, it’s still very much a man’s game), but it is based on as many as a hundred different sources. There are a handful of producers that make a product similar to a single malt scotch, but they are very rare.

Cognac was designated a wine growing region on May 1, 1909. It took another 30 years for Cognac to be declared a Appellation d’origine contrôlée (AOC) or Controlled Appellation of Origin.

The region itself is broken down by zones  which roughly correspond to the geologic tendencies. there are six such “growing areas” ranked in order of quality and considered “crus” under the AOC –  Grande Champagne (GC), Petite Champagne (PG), Borderies, Fines Bois, Bons Bois, Bois Ordinaries. Finally, there’s an oddball designation, Fine Champagne, which is a blend of the top two crus.

Don’t be confused, the word champagne has nothing to do with the bubbly chardonnay drink that we pop on special occasions. In fact, cognac must be made from at least 90%  Ugni Blanc, Folle Blanché or Colombard.

The four predominate soil characteristics of the region are chalk, clay, limestone and sand. Each of the regions has a specific composition that sets it apart from the others. This helps distinguish the flavor profiles as much as the blending does.

Here’s a map of the region. You’ll note that it looks roughly like a target:

Map courtesy of the Borderies distillers Domaine du Buisson and can be found here:

This is a small distillery that blends from their own vineyards, so they are closer to the spirit of the single malt scotch distiller, although they still blend from various casks. They just don’t buy from a variety of producers like the major houses do.

Anyway, getting back to the map, you can see that the highest designation, Grande Champagne, comes from a roughly round region that would be considered the “bulls-eye”. Some call it “The Golden Circle”. This is the home of the biggest distillers and the source of the highest quality raw stock. Its soil is mostly chalk, clay and limestone. It is this composition that gives the best cognac its renown for consistent quality. However, as in the case of Domaine du Buisson, excellent cognacs can be found outside of the region, although they can be hard to find in the US. Also, there are some blends that rely on grapes from outside this region, such as Martell’s Cordon Bleu, which relies on the nutty and floral characteristics of grapes grown in Borderies.

Now that we’ve briefly discussed the regions, lets delve into the various quality designators and the production of cognac.

First of all, you should know that if there’s an age designate, the age refers to the youngest vintage used. the minimum age requirement is two years, but this is virtually never used. Distillers usually start at 12 years and go up from there. Until it’s blended, the wine is known as eau-de-vie (waters of life). Cognac is twice-distilled, normally in pot stills, also known as alembic stills. These are onion shaped copper pots. 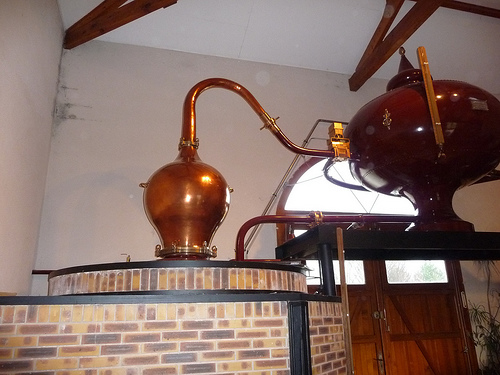 The ratio of eau-de-vie to cognac is roughly 9 to 1.

The various initials that are supposed to designate quality are sometimes confusing to the novice. The lowest quality cognac is called VS, or “very special”. I don’t know what makes it “very special”, since there’s no S rating, but there ya go. Here they are in order from bottom to top:

VS – very special. This is the “youngest” of the cognacs. Minimum age of the eau-de-vie is 2 years old.  Technically, you could have 95% of the cognac being 50 years old and only 5% 2 years old, and it would still be considered VS. Theoretically, this could be far superior and pricier than a VSOP or XO.  Obviously, a distiller would be out of his or her mind to do this. VSes are generally made from the youngest of the usable vintages. The fact that it’s the lowest designation doesn’t mean that it’s bad, just that it won’t have the distinctive and rich flavor profiles of headier blends.

VSOP – very special old pale. Sounds very British, doesn’t it? I suspect that they are responsible for the designation, especially since the acronym refers to English words. This is the next step up in quality and price. The minimum age of the  eau-de-vie is 4 years old. Generally, you’ll see the average age of the eaux-de-vie ramp up as we go up the rungs.

XO – Extra old. Minimum age is 6 years old. Now we’re talking mostly old vintages, some of which can be a half a century or more old. This is going to change to 8 years in 2016, assuring an even more exclusivity.

You also have other qualifiers. Napoleon falls somewhere between VSOP and XO. It must be as old as an XO, but presumably, the average age will be lower, so it won’t be quite as expensive as an XO, but it demands a premium above VSOP.

Hors d’âge (beyond age) is basically a premium XO.  Louis XIII de Rémy Martin and Hennessey Richard (pronounce it ri-CARD) are examples of this. For example, Louis XIII uses 1200 different eaux-de-vie, some of which are 100 years old.

Extra – older than XO, you might think of this as an XXO. This can command a premium double that of an XO.  Rémy Martin even has an “Extra Perfect” that almost  doubles the price of Extra.

There are a couple of other more obscure designations that we’ll let slide.

There is one maker who is famous for ocean maturation – Kelt. They send barrels on a 3 month tour (as opposed to the three hour tour that Gilligan and his mates made). Unlike the Skipper and Maryanne, these barrels come back at the end of their voyage. This is done to pay homage to the origins of brandy and cognac as well as possibly introduce the variations in temperature and the influence of the salty sea air.

Cognac is traditionally served in a warmed brandy snifter, although Riedel and others have designed dedicated cognac glasses that look more like larger port glasses. Warming the glass allows the aromatics to be released, giving the taster a profound nose of rich scents. Whenever I serve a cognac, I give it a little swirl on the table to encourage this aroma. there are even nice devices that perform the function of warming that you are unlikely to see in most restaurants. 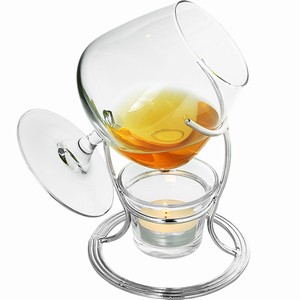 Cognac should be savored at the end of a meal and not drunk in conjunction with food, although any rule can certainly be broken. If you drink cognac with savory dishes, both will suffer. I really don’t even suggest serving cognac with sweets. That’s better left to sweet dessert wines. While some drink it with various juices, if you’re going to mix them, you should stick with cheaper brandies. It’s a waste of your money and the quality of the spirit.

Well, I hope that this very large thumbnail sketch gives you a better appreciation for this fine spirit. As a waiter, you should always keep cognac in your back pocket for those guests who clearly have an eye for quality. A little prompting could add another $10 – $300 to the check and provide the guest with a taste of luxury so often lacking in today’s dining.