Cookbook of the day – La Methode

Recently, we discussed Pépin’s companion to this volume, La Technique. This is the “continuation” of that first volume. There really isn’t much distinction between the two volumes – it’s not like the first only talks about “techniques” and this one talks about “methods” (as if there’s a huge difference between the two terms).  He basically wanted to cover topics that he hadn’t really covered in the first volume, so he starts with something ignored in the first volume – sharpening a knife.

He then covers such diverse kitchen skills as butterflying shrimp, straining and skimming sauces, boning a saddle of lamb, making various chocolate constructions such as boxes, leaves and bark, and he also covers such esoteric subjects as peeling and glazing chestnuts, carving  “cucumber turtles” and “mushroom fish”, and preparing marrow.

Once again, there are copious black and white photos that illustrate each step in the various processes and there are plenty of recipes to keep any recipe hound busy for months.

You can now buy both volumes bound as one, but the originals can still be found in separate volumes for a reasonable cost.

Pépin is a treasure who we should celebrate here in the US for being someone who, along with Julia Child and Paul Bocuse, made it fashionable to embrace French cuisine. And this enabled America to look past its shores and also to its immigrant population as culinary inspirations which have enriched our own cuisine. 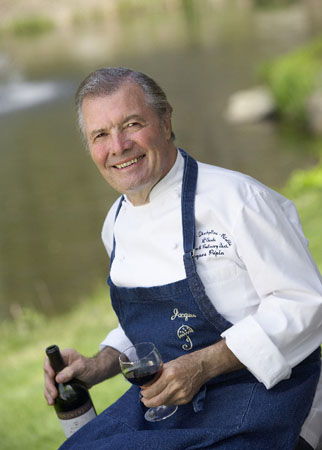 Cookbook of the Day – La Technique

This is a companion volume to Pepin’s La Methode, which I will review in a future installment of Cookbook of the Day.  Both volumes can now be purchased in one volume, but I’ll discuss each one separately.

This was the first of the two volumes and it’s exactly as the title describes – all about technique. It starts with holding the knife and finishes with making Cheveaux d’Ange (angel hair). No, angel hair doesn’t refer to pasta, but rather sugar gossamer “angel’s hair” used to decorate elaborate desserts.

There are recipes scattered throughout but only recipes that require use of a technique to accomplish. Filled with step-by-step matter-of-fact black and white photographs, Pepin takes you through the basics of breaking down a chicken, shucking clams and oysters, making terrines, poaching eggs and even folding napkins.

This was one of the first really practical volumes on technique that clearly showed the American chef step-by-step how to replicate the results of the top chefs of the world. It, along with its sister volume, is really a foundation book for any kitchen library. You should pick up the new combined edition if possible, but you can also find the two books in both hardback and paperback in selected used book stores. My copy of La Technique is hardback, while my copy of La Methode is in paperback. I don’t mind at all.

A confetti version of  Cheveaux d’Ange  – imagine that it’s made of sugar and sits atop some elaborately constructed gateaux.