Cookbook of the day – The Peter Reinhart Canon 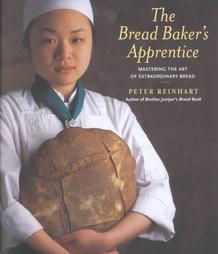 Before I post the pictures and info, a preamble.

When I started highlighing cookbooks in my collection, the intention was to do something with cuisine around the first of every month, including a cookbook. Well, since about the middle of last month, it’s been almost daily that I’ve highlighted a cookbook. I’m not guaranteeing that I can keep up the pace, but it’s apparent that cookbooks are going to be featured regularly, if not almost daily here. So, I thought to myself, “Why not do something a little more than usual on the first of every month”? 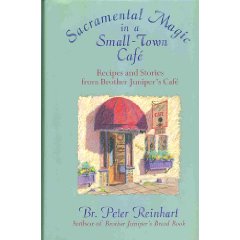 I’m going to forgo the usual titling and let you rely on Google to find the ISBN numbers, etc.

Who is Peter Reinhart?

He is probably the most important writer on the subject of bread and associated products on the scene. A former Brother in the Christ the Savior Church, he now writes,  teaches, and lectures around the country on the subject of baking bread.

His first book, Brother Juniper’s Bread Book showed that he was profoundly and spiritually philosophical about baking bread. The book became famous for his take on an old Scottish harvest bread called Struan.With no less than four additional grains added to flour, this bread became almost a celebrity itself in the baking world. I bought the book around ’94 or so and no less a food writer than M.F.K. Fisher wrote the Foreword. I happen to prefer my edition, which has this cover: 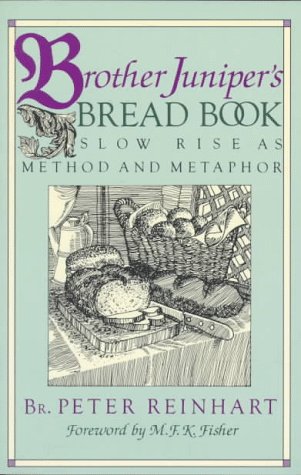 I think that the first picture at the top is for the paperback. The hardback isn’t that much more expensive and it’s a much nicer package. Spring for the hardcover.

In that book, you could see the kernels (pun intended) of future explorations.

Of the three “bread books” at the top, the first you should get is The Bread Baker’s Apprentice. It outlines his most recent impact on American baking, the slow rise method. He discussed this in Brother Juniper’s Bread Book, but took it further when he discovered a sort of “super” baguette type of bread in France called pain à l’ancienne that he discovered a Parisian baker named Gosselin making in hisBoulangerie.He discovered that the secret to this amazing bit of French bread masterpiece was a technique similar to his slow rise method, except that it relied on further retardation of the rise by refrigerating the dough overnight. This enables an extended enzyme release which improves the flavor of the dough and helps support the proper crumb texture, which is the development of large holes in the crumb. To me, this is the centerpiece of this book, as struan was for the first book. But this reference book is much more than just that one technique. There’s a whole workshop on the science of bread baking and the production of various forms of bread, with the addition of what he calls “formulas” (in lieu of recipes). The various dough shaping techniques are shown with clear and detailed photographs. This is a must-have volume for anyone who enjoys baking bread. In fact, it has this seal:

The second book, Crust and Crumb is less essential in that it covers a lot of the same territory as The Bread Baker’s Apprentice. It was actually the first book where he explored the retarded fermentation and the Apprentice book is its elaboration (written a couple of years later. If you were to choose between the two books, I’d choose the latter. But Crust and Crumb is still worthy on its own. I have both.

In 2003, he went on a search to find the best pizza, which was a long-standing passion of his. The book American Pie continues his philosophical and scientific approach to baking, and he outlines a most interesting journey in his search for the perfect crust, a goal which he finds is really an impossibility. He also finds that the overnight, refrigerated fermentation is beneficial for certain pizza crusts, and he also outlines the various styles of pizza found in America and Italy.

His Whole Grain Breads tackles the art of baking whole grain breads, the denseness, different  hydration requirements and dough manipulation of those grains and flours requiring a different skill set. This is definitely a book for those who eschew highly processed flours.

Fi9nally, Sacramental Magic in a Small-Town Café is the book that immediately followed the Brother Juniper book. It is mostly stories and ruminations on the art of baking and cooking, the value of food in our lives and is scattered with varied recipes. Depending on how you look at it, it’s either the most optional or the most essential of his books, as it’s a “Tao of cooking” sort of book.

He has a new book coming out, and you can follow his blog here: