From Restaurant Report – what’s wrong with kids these days?

From The Great Debates” series at “Restaurant Report”:

The State of Service in our Restaurants

A man I worked for, a maitre’d/restaurant owner of the Old School, once told me that he always ignored resumes and applications when hiring servers. He’d nod, make polite noises as the applicant presented himself, and then he’d ask the person to bring a folder or a sheet of meaningless paper over to the bar. He would watch how the person walked, moved, and generally performed this relatively simple task. And he would base his decision to hire primarily on that.

On first sight, this is a pretty flimsy, if not downright pompous, sort of interview procedure. But there’s wisdom to it, and it’s at least as sound as the stats listed on any application which can tell you nothing of how this person carries himself; which, in turn, is pivotal in getting a sense of what this character is all about.

That man has since retired, although “retreated” might be the better word. It seems he was hiring fewer and fewer people towards the end. The walks he witnessed had become struts, and badly dressed kids, who swore they needed a job, regarded the request he would make to carry over the paper as burdensome.

Yes, the article is a bit curmudgeonly. And there are plenty of young servers that I’ve worked with who have a great work ethic and a great attitude, just as there are old grumps such as myself who are always yelling for those kids to “get off my yard”! (at least the workplace equivalent of it.)

The one thing that I take issue with is this:

“…any waiter who approaches his table consciously anticipating a tip amount is no waiter. And this is precisely what you encourage when you tell these kids that they’re salespeople”.

Frankly, I am one of those who consciously anticipates a tip. and I am a waiter. The tip is my rationale for working. And face it, we are salespeople. But here’s what I don’t do. Even though I’m human and I’ll do a little prejudging regarding the tipping abilities of the guest based on their demeanor, I don’t tailor my service to them unless I know for a fact that they are poor tippers (we have more than our share of regulars and yes, some of them are not very good tippers). No, I’m not going to spit in their food or sabotage their meal, but I’m not going to give them the priority that I give the rest of my diners.  I’m not going to give them my best recommendations, I’m not going to sweat if their food is running a little behind; basically they’re going to get the service that they pay for.

And I’m a seller. But here’s the difference – I only sell to enhance the meal, not to raise the check, although it’s a byproduct of my selling efforts. Sometimes, rather than upselling, I’ll actually downsell if it’s in the benefit of the guest. It’s all about The Experience. Greed is never the goal. Great money will be harvested if you work in the interest of the guest at all times.

Sorry for the strange formatting in the first quoted paragraph – that’s how it came along for the ride.

When you go to this page, you’ll find links to other interesting articles, so click on them and have some fun! 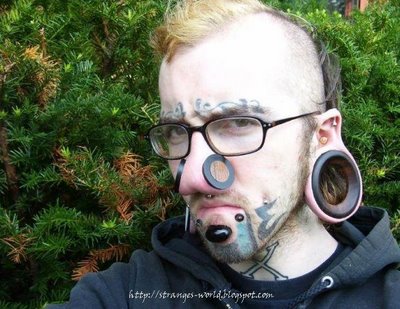 Yeah, I’m your waiter. What the fuck do you want?