Cookbook of the day – The Habanero Cookbook 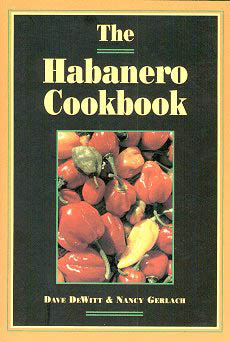 This book, written by famed “hot food” writers, Dave Dewitt and Nancy Gerlach, is actually outdated, even though it was written in 1995. It declares the habanero as “the hottest pepper in the world”. Those who follow this blog know that there is actually a hotter pepper, the India-based Naga Jokolia, a pepper which is twice as hot as the habanero. Also called “ghost pepper”, this little bomb of a pepper is allegedly used to make pepper spray by the Indian police.

However, this doesn’t reduce the utility of this well-written book.

The first part of the book is a comprehensive source of the history of Capsicum chinese and taxonomical information about variations within the species. Perhaps the most fascinating part of this discussion is the origins of Red Savina, considered the hottest of all of the members of the habanero family. The authors list at least 25 names for the habanero given by different locales, locales mostly found in the Caribbean but also as far-flung as Fiji.

The habanero distinguishes itself from many other chiles through the very distinct citrus and fruit notes that it displays. This gives it a depth of flavor that isn’t obscured by its intense heat.

The discussion turns at times to cultivation, crossbreeding and hot sauces as well.

The recipes are well-chosen and diverse, offering a glimpse into Caribbean cooking, but it doesn’t end there. The habanero is incorporated into more generic dishes as well.

If you’re a chilehead, this book is right in your wheelhouse. It’s not an expensive volume and will expand your repertoire of “fiery foods”.